Since the inception of NCAA’s name, image, and likeness (NIL) laws in the summer of 2021, college athletes have been looking left and right to find companies to shake hands with to promote themselves and monetize their brands.

Since then, almost 7,500 collegiate athletes have signed up to represent not only their colleges but a sports media company, one that has been involved in myriad controversies throughout its time. Controversies that particularly involve Barstool founder Dave Portnoy.

For many of those thousands of athletes, including several from Marist, Barstool Sports was a familiar name to partner with and an easy process to go through. To be considered, an athlete has to fill out an application, send photos of themselves in their respective school uniform, and add “Barstool Athlete” to their social media bios.

Despite the ease in joining, those Barstool Athletes at Marist may have to grapple with the challenges of aligning with the brand after Portnoy called out Bailey Carlin, a former contributor and current Marist adjunct professor, for inviting ESPN analyst Mina Kimes to speak to his Sports and Social Media class this semester.

Barstool and Kimes did not respond to Center Field’s request for comment. Carlin declined to comment for the publication.

An article from Business Insider came out in November 2021, stating that three women met Portnoy for consensual sex that turned into situations the women said they would not have agreed to originally. Two of these women also said that Portnoy filmed them without consent. Most recently, another article was published announcing that three more women have come forward also claiming that Portnoy filmed them without consent. Portnoy responded on Twitter saying, he had “never done anything that’s remotely not consensual” and he felt that this article already had a motive and narrative going into it with the hope of canceling him. As a result, Portnoy is suing Business Insider for defamation.

Aside from Barstool Athletes, Marist College has another connection with the company, as it was a stop on the Barstool Blackout Tour in 2012 and 2013. These tours caused trouble across the nation with underage drinking and high levels of intoxication, along with many women’s groups protesting on college campuses in response to Portnoy’s comments condoning rape and objectifying women.

Most recently though, Carlin, who teaches Sports and Social Media at Marist, had a public confrontation with his former employer. Carlin worked as a social media specialist and blogger at Barstool for a little over a year and recently freelanced for Barstool’s Twitter account on NFL Sundays. After announcing Kimes as an upcoming guest in his class, who was also a school-wide speaker at the college in the fall, Portnoy discussed the topic of “Bailey Beef” at the top of his podcast, “The Dave Portnoy Show With Eddie & Co” on Tuesday, February 8. 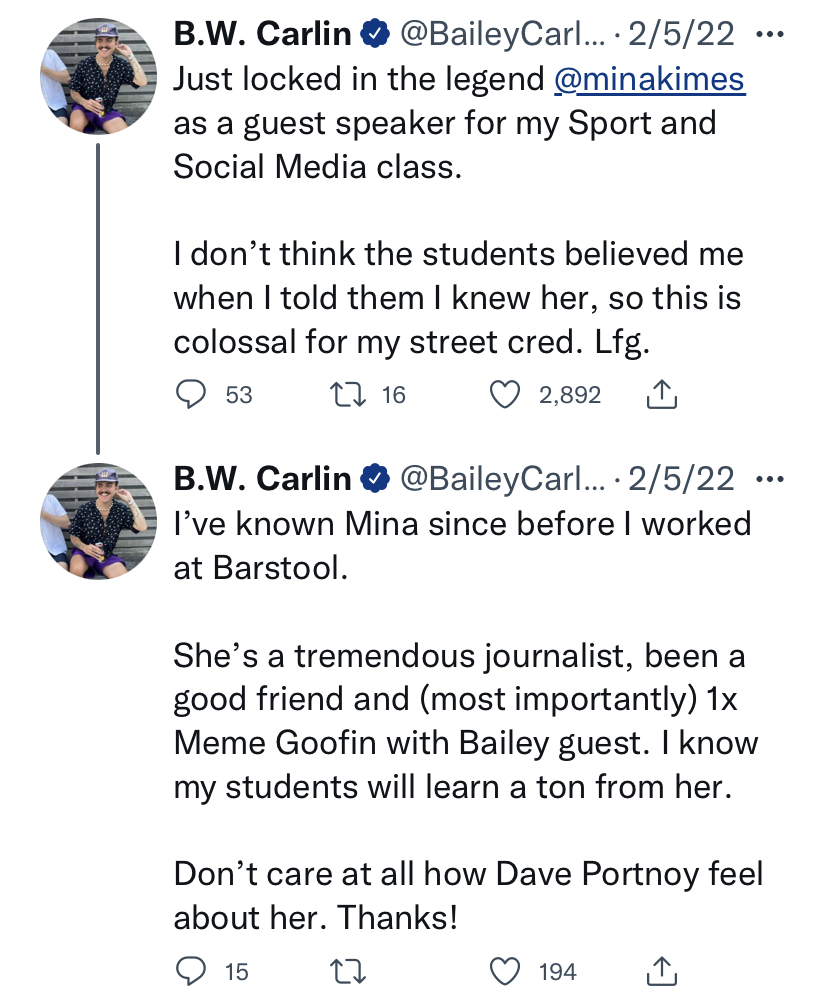 Portnoy expressed that he had an issue with the last line mentioning him, which incited him to act. “I didn’t really know this was happening. I don’t really care that it’s happening. People know how I feel about Mina,” he said on the podcast.

When the first Business Insider article was published, Kimes retweeted it and Portnoy responded to her, saying to “look at the facts and then comment on it” and to “hear the other side of the story,” he explained on the podcast. According to Portnoy, she blocked him on Twitter afterward and she retweeted the new article that recently came out as well.

From this tweet, Portnoy expressed that Carlin “co-signed.” In other words, that “he thinks I am a rapist. That’s what he said to me.” Carlin did not say Portnoy was a rapist.

“It’s this new generation — what world can these newbies, like you can publicly tweet that about your boss or the guy that runs the company. They’re so coddled and everyone pats them on the back, ‘Oh it’s okay.’ It’s disgusting. To me, he is a disgusting human and he is dead to me,” Portnoy said, referring to Carlin, on the podcast.

This stirred up Twitter and the Marist community. For one Barstool Athlete, their opinion has not wavered. For another, it has sparked some thinking about who and what they’re representing, and the importance of being informed.

The first Marist athlete Center Field spoke to has been a long-time supporter of the brand, buying the merchandise and listening to a few of the podcasts. They read parts of the Business Insider article and followed what Portnoy was saying in response–viewing the direct messages between Portnoy and the women involved.

They also mentioned that they were skeptical about some of the findings of Business Insider because their CEO Henry Blodget has “stake, a short position in Penn Gaming,” which is tied to Barstool. Penn National Gaming acquired a 36 percent share of Barstool Sports for $163 million in January 2020 and the deal calls for another investment of $62 million within three years to attain 50 percent ownership.

After the article in November was published, Penn National Gaming came up with a weak third-quarter earnings report. It rebounded slightly, but on Monday it was down 19 percent from where it was before the story was published. Portnoy said that Business Insider’s story was an attempt at “insider trading,” but he said he didn’t have any proof.

“He [Blodget] kind of has a vested interest in Dave Portnoy and Barstool failing, so that made me uncomfortable just completely believing the Business Insider. Dave put it like as a ‘hit piece,’ that’s what he called it. It just seemed to not be…things weren’t adding up,” said the first Marist athlete Center Field talked to.

On the other hand, the second Marist athlete Center Field talked to — freshman libero volleyball player Jaden Reasor — was not aware of the controversies until asked for an interview, explaining she heard of Barstool Sports before NIL and when the opportunity came up to be a Barstool Athlete, she didn’t know much about Portnoy.

“I didn’t really know anything about his reputation as a person himself. I really had only heard of Barstool Sports and thought ‘Okay, this would be cool to just say I am a Barstool Athlete,” she said. “I did a little more research into it and found out about the whole November thing [the allegations made against Portnoy in Business Insider] that came out and that obviously makes you question like, who am I representing? Do I want to be representing this person?”

Reasor was also curious as to why the company isn’t holding Portnoy accountable for these actions. “It also makes me question what are all these college athletes now representing and what does that say about these big companies that can kind of just get away with that,” she said and expressed that if his reputation worsens, he may bring the name and business of Barstool down.

“It’s just interesting that not more people, I guess, would know about it and why it’s not common knowledge because obviously, I am considered a Barstool Athlete, yet I didn’t even know about this–the founder of Barstool athletics being such a controversial person,” Reasor said.

“His formula has worked and whether he says things I agree with or not, he just kind of doesn’t really waver from it,” said the first Marist athlete. “In this day and age, where anything you say can get you in trouble, it’s been pretty amazing to see a guy land on his feet so many times.”

While Portnoy is the founder of Barstool, Erika Nardini is the current CEO of the company. The first Marist athlete explained: “He’s kind of removed himself from a lot of parts of the business. Just kind of helps promote it and does certain podcasts and everything. So as far as Barstool as a business, he is not as hands-on maybe as he used to be. So I don’t know if that’s maybe contributed to people feeling okay staying with it.”

They also mentioned that they tend to look at more of Portnoy’s actions rather than what he is saying on Twitter, such as The Barstool Fund that raised over $41 million and helped 443 businesses. “That was something I really liked to see and that’s what made me kind of proud to be a part of it,” they said.

There is no official NIL policy at Marist, as the college is waiting on New York state’s rulings on the new laws,  per Associate Athletic Director Harrison Baker.  Athletes have the freedom to make NIL deals with anyone they choose to while reporting with compliance to Marist athletics in order to keep track of who is doing what with whom. Since the Marist athletics department does not facilitate deals for the student-athletes, they will not comment on their deals.

In the future of NIL deals, both athletes are keeping their options open as more businesses and athletes navigate their way through these new opportunities.

Center Field reached out to 33 Marist student-athletes signed to NIL deals and only two would discuss this with the online sports publication. Neither has made any money from being a Barstool Athlete. The deal hasn’t gone very far beyond receiving the free merch, a future discount on future purchases, and being announced on their social media page.

“Now it’s just a bunch of kids that are just like, ‘I’m a Barstool Athlete but what does that even mean?’ I’m not really doing anything for it. Right now I really am just representing their name and wearing the free pieces of gear they sent and that’s it,” Reasor said. “So it’s kind of like, is that association worth it? There’s really not any benefit for me right now.”

“A lot of people have it really just for the name,” she added.

In the beginning, Crossnet — the four-way volleyball game– reached out to Reasor, hoping for her to be a Crossnet athlete/sponsor. She originally agreed, however, it ended up being too much of a time commitment for her even though she had the opportunity to be paid.

The deal involved creating monthly promotional videos of her and her friends playing the game to advertise for the brand. She is hoping to find more brands that will support smaller schools, as not every company will get their hands on the poster college athletes. She has also signed up for Mogl, which is similar to a job board but for NIL. Although there are few opportunities sent through those emails, she feels they’re worth considering.

“I do want to try and see what else is out there just because it’s a really good opportunity to benefit from this. The sport itself takes up a lot of time so that takes time away from really being able to make money on the side or get an actual job. Being able to combine the two would be really nice,” she said.

Reasor believes that if nothing new comes from Barstool, many might turn to look for more or new deals to make. She is interested to see if there will be more events and experiences to help promote herself as a student-athlete or if this will be a one-time excitement. “Which honestly, I wouldn’t be surprised if that were the case,” Reasor added.

“If something came available, I would always look at it,” said the first Marist athlete. “I am a Dave Portnoy fan, but I’m an objective [person]. So if things came out that didn’t sit well with me, I would definitely look to maybe not be a part of that anymore.”