Looking for their first win of the month as they try to mount a late-season climb up the MAAC conference standings, mens soccer took care of business in prevailing over Canisius by a score of 4-2. The final score wasn’t indicative of Marist’s dominance, in part due to a garbage-time goal, but the overall results were promising for the Red Foxes: the ball movement was on point, players routinely sliced and diced their way up the field, and the team netted four goals and racked up four assists while opening up a 4-0 lead by the 51st minute.

Such an offensive outburst served as a refreshing change-of-pace, as it’s been a rough go of it lately with Marist (6-6-1, 2-4) entering play, losers of four straight conference matches, all of which were decided by one-goal margins. The latest narrow loss came on the road last Saturday to conference-leading Manhattan by a score of 2-1, with the Jaspers netting the go-ahead goal in the 73rd minute. Canisius (1-7-6, 0-4-3) also entered play in dire need of a victory with only one win to their name all season.

Marist got off to a much-needed fast start in the fifth minute with a long-range free kick coming from the far left side and landing inside of the goal area, where graduate student midfielder Jacob Schulman found the ball and assisted sophomore defender Andre Cutler-DeJesus on a close-range shot that was buried in the the lower right portion of the net. The fast start against Canisius’ goalkeeper, graduate student William Howard, was particularly impressive considering he entered the day leading the MAAC conference with 5.54 saves per game. 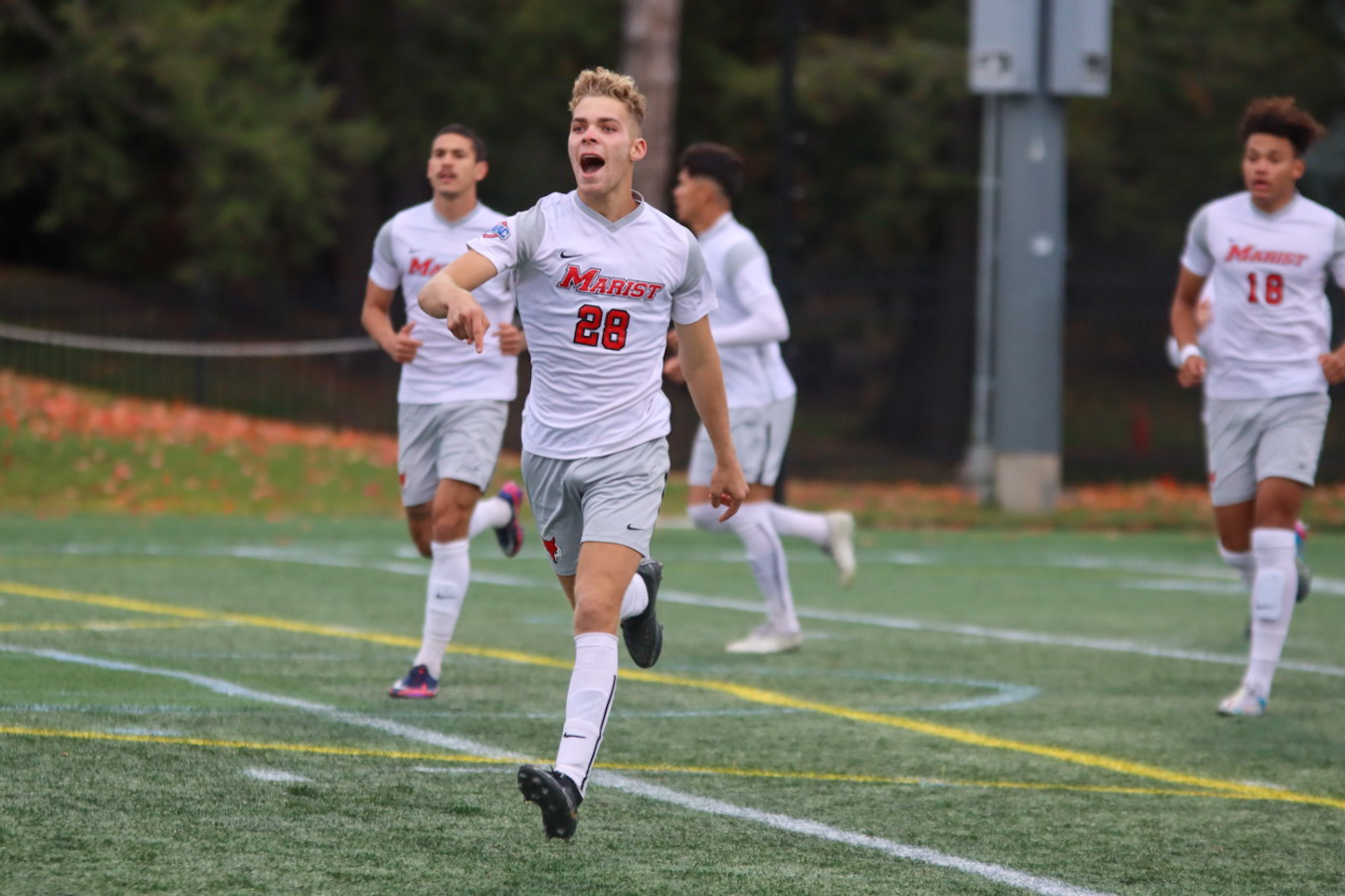 Canisius made things interesting a few minutes later when they advanced the ball deep into the offensive third and uncorked a couple of promising-looking shots, the most impressive of which being a high-winding shot taken from the left side by freshman defender Josh Miller. Miller just barely missed netting the equalizer, as his shot clanked off of the crossbar directly above the top right corner of the goal.

On the heels of Canisius’ missed opportunities, Marist used teamwork to extend their lead in the 13th minute on a play that unfolded almost perfectly. Senior midfielder Liam Salmon fed graduate student wing Hugo Guerra up the right side, allowing Guerra to advance the ball toward the goal line before passing across towards the left post where junior wing Jared Juleau was waiting. Upon receiving the pass, Juleau deposited the ball in the back of the net with Howard unable to get to the shot in time; Salmon along with Guerra were both credited with assists.

The prettiest play of all came for Marist in the 36th minute with Guerra once again dribbling up the right side and beyond the 18. The pitch seemingly transformed into his own domain as he sent defenders flying in all directions while winding and weaving his way through the Canisius line. Guerra’s agility and craftiness eventually allowed him to break free and feed the ball to senior defender Henrique Cruz on the left side, resulting in his second assist of the day. The goal was Cruz’s fourth goal on the season, tying the injured Richard Morel for the team lead.

“I think we started with a good focus. It wasn’t 100% from the start, but we picked it up, especially in the first half,” said Guerra. “The boys were on it today.”

The action resumed in the second when a foul on Canisius in the 51st minute led to a penalty kick, with Schulman lining up to do the honors. Sure enough, he struck the ball well enough to slip it past Howard to push the Marist lead to 4-0.

Canisius finally got on the board in the 63rd minute on a set piece, as sophomore forward/ midfielder Dylan Rice curved a perfect corner kick inwards towards the goal from the left corner. Sophomore midfielder Kodie Sarkodie received the strike and finished it off for his first score of the year.

Despite the well-executed play, the score was far too little and much too late, as the original four-goal lead would withstand another late garbage-time goal with about a minute left to deliver Marist a 4-2 victory.

“Before the game, I was like ‘you know the old Chinese proverb: the journey of a thousand miles starts with one step,’ so we’ve got work to do, and we put ourselves in the position we’re in unfortunately, but we needed to get one today,” said head coach Matt Viggiano. “Now we lick our wounds and get ready to go on Saturday [against Rider] and keep going.

“Until they tell us we’re out, we’re not out,” he continued.

Marist will look to continue to make a last-ditch push towards the conference tournament when they square off against Rider, the team they vanquished in the MAAC championship game a season ago. Kickoff is set for 7 p.m. on Saturday in western New Jersey.