On a brisk evening at Tenney Stadium on Nov. 17, the 2021 Tri-State Champion Marist club rugby team set out for a two hour practice, moving the rugby ball up and down the field, scrimmaging at a high intensity with a competitive and rigorous feel. This would be the team’s last practice before entering the Rugby National Sweet 16 in Cherry Hill, New Jersey, led by former Italian National Rugby scrum-half, Federico Gubana.

It’s no doubt that Gubana contributed to the large success of the Red Foxes this year, being Tri-State champions for the first time in about 10 years. In the championship match, Gubana led the team in tries, conversions, and penalties in an outright victory against RPI, along with scoring an overwhelming 32 points.

Although the Red Foxes were defeated by Georgetown in the Sweet 16, their efforts this year certainly haven’t gone unoticed. At the root of this success is the leadership and talent that Gubana was able to provide in his first year as a Red Fox.

Born in a small city near Venice, Gubana, 23, started his rugby career playing around the age of nine. In Italy, Rugby is vastly more popular than in the United States. “In Italy, we are very into soccer,” said Gubana. “So, like 90% of the children, I was playing soccer and I decided to try rugby. For the next five years I played soccer and rugby at the same time. When I was 14, I decided to play rugby.”

Playing four seasons for Mogliano Rugby 1969 in the Top 12 division, Gubana competed in the top professional level of Italian Rugby. He went as far as to compete with the Italian National Team, competing mostly against other teams in Europe, where the sport is most popular. The national team also competes in Rugby Europe Sevens, the highest level of competition in international rugby. 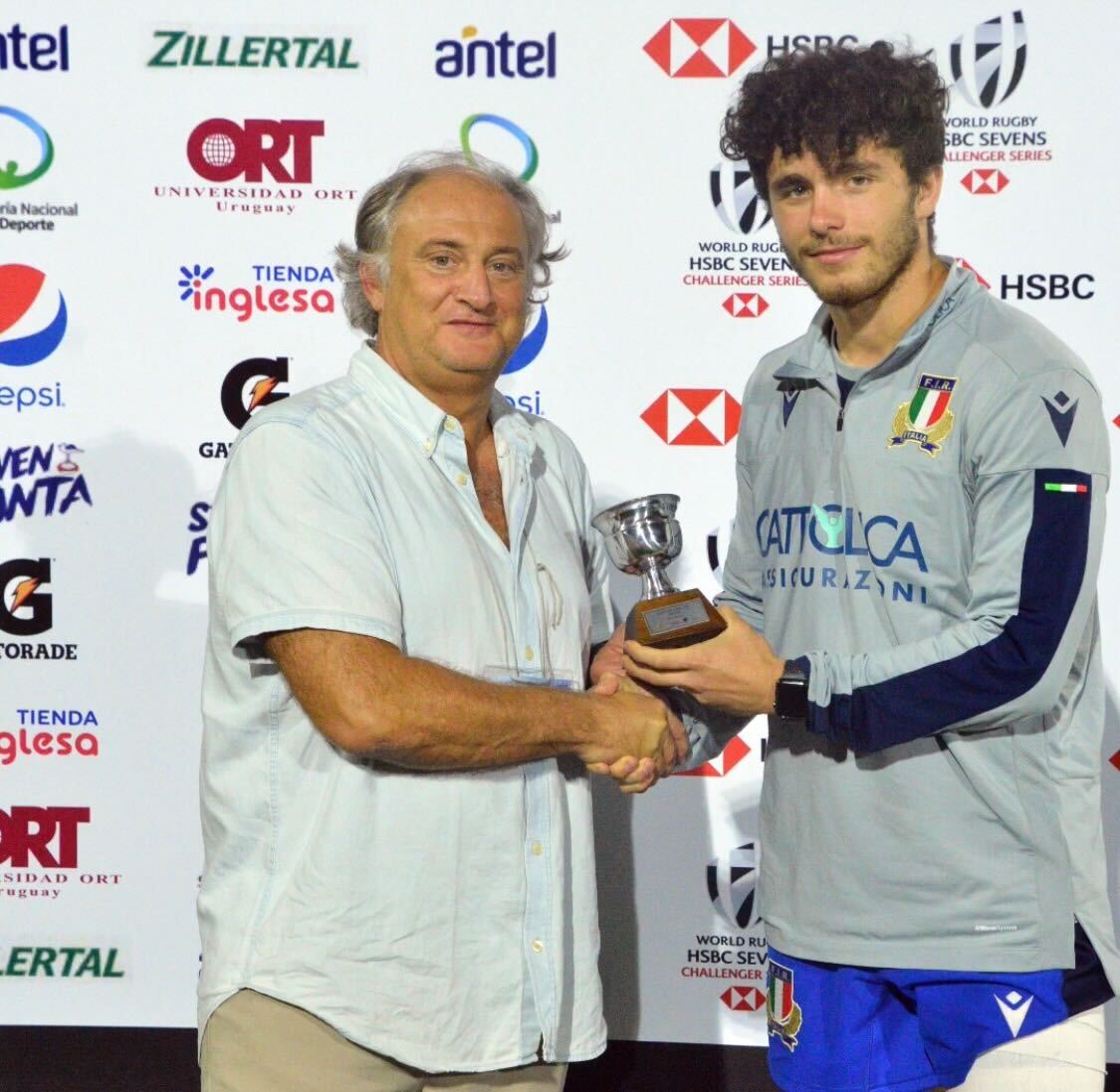 Gubana winning the Top Try-Scorer Award from a tournament with the Italian National Sevens team in Uruguay and Chile.

“When you are one of the younger players on the team, you have to show respect to everyone and always be receptive,” said Gubana. “And you’re the youngest so you know your role [on the team].”

Arriving on campus in the Spring 2021 semester, Gubana had to settle into the beginning of his Marist life during the midst of the pandemic. However, he had been in contact with Marist head coach James Kimberly since 2019, seeking the opportunity to play for the college team.

“It was a massive undertaking getting him here and his first semester was right in the middle of the pandemic,” said Kimberly.

Transitioning from Italy’s top rugby team to the club team at Marist College required some fine tuning. For one, the age group of the players. Gubana is 23, playing on a college team consisting of students mostly from 18-21 years old.

“I’m playing with guys that are younger than me,” said Gubana. “I have to be a guide and say the right words, and be more patient.”

Another adjustment was the style of play at the American collegiate level versus the level Gubana played at his club team level, as well as with the national team. Marist is currently a Division II rugby team playing in the Tri-State region. At the end of the season, the Red Foxes became the number one seed in the Tri-State region, as well as the 17th team in the country at the DII level. The fusion of both styles have helped him personally, as well as the entire Marist team.

“Fed has improved on his understanding of the game in the U.S. and our level as a college club,” said Kimberly. “One of the biggest challenges was always going to be how he could adapt to this level in the states. Even if the top level rugby is similar at the core, the style of play here is likely much different.”

Gubana has also undergone a positional change since joining the Red Foxes. On the national team, he played as a scrum-half in Italy and has taken on a role as a fly-half at Marist due to his skill level and size comparison to the Marist team.

“At the national level, I’m more useful to play scrum,” said Gubana. “It’s better for me here because I am average size on the [Marist] team and I can play fly-half. The position is a role like the quarterback in American football, though the sports are very different.”

Gubana has meshed with the Marist team quickly in his first season, and he credits the energy and listening ability of his teammates as a factor to the success of the team and even impacting how he plays on the field.

“They really, really interact with me and care about rugby,” said Gubana. “Whenever I open my mouth they listen because they want to get better, and when I talk to them I want to help them out. They understand my purpose and try to reach everything I give them.”

Kimberly credited the talent of Gubana and his versatile skill set in rugby that has set a precedent when playing against other collegiate teams this season. His consistent kicking ability has been a vital part of Marist’s scoring this season, including three penalty kicks in the Tri-State championship match.

“The way he gets the ball moving so effortlessly with both hands is special,” said Kimberly. “He is likely in the conversation for the best kickers in the country at our level.”

Not only did Gubana’s impressive skill set improve the team performance this season, but he has also made a relationship with the coaching staff that has improved the team’s dynamic of play, as well as his selflessness to the team.

“Good players can do great things for themselves, great players can do great things for the team,”’ said Kimberly. “Guys want to play with him, not just alongside him. When we weren’t certain what his role would be or how much rugby we would be playing I still thought there would be a great impact by his presence. When he was hurt earlier this year he came to every training and worked with the guys filling his position.”

Despite a loss against Georgetown in the Sweet 16 to cut the season short, there were no real shortcomings this season for the Red Foxes. The addition of Gubana to the lineup has not only changed the team’s performance this year, but has elevated the fundamentals and chemistry for seasons to come.

Since joining a team far away from home, Gubana has learned from his teammates that the passion that results from his sport can be seen anywhere, despite the smaller rugby presence in the United States.

“American football has a dominating culture over rugby here in the United States, which is perfectly fine,” said Gubana. “But in many countries like Italy, Germany, France, and more, besides soccer, rugby is life to many. Without pads, it has the same ferocity and speed as football, and play never stops in rugby. A lot of people might think rugby has many weird rules, but after one game you can start to understand and appreciate the sport.”

The rugby season is over, but there is no doubt the Red Foxes are more than ready for next season. The addition of Gubana provides a new foundation for Marist rugby to thrive upon, and the team’s intensity towards the sport of rugby will prove dangerous to all in the Tri-State region and beyond.