When looking back on the archive sports broadcasts produced by Marist Athletics, it’s pretty obvious that they’ve come a long way. Prior to 2017, broadcasts for Marist sporting events typically consisted of nothing more than raw footage cobbled together with audio from the school’s radio announcers.

The makeshift broadcasts of old have been transformed into fully-fledged productions for sports such as basketball, football, and soccer. By entering into contractual agreements with ESPN to carry out broadcasts, Marist Athletics has given viewers a professional product to watch without sacrificing opportunities for amateurs to get involved in bringing each broadcast to life.

“I’m very proud and happy to say that our entire broadcast is basically student-run,” said Director of Athletic Multimedia Nick Skidmore, who also mentioned that most students get involved through a sports communications class offered by the college. Skidmore is one of a number of key figures entrenched within the broadcast operations at Marist, as he oversees everything related to video, such as broadcasts, highlights, and GIFs.

In supervising the nitty-gritty aspects of each broadcast, Skidmore is tasked with coordinating a large number of students who take on different roles. He organizes the student-run control room and technological apparatus, with a combination of students and paid interns being responsible for manning five separate cameras, a switcher board, a video replay machine, and a graphics station. 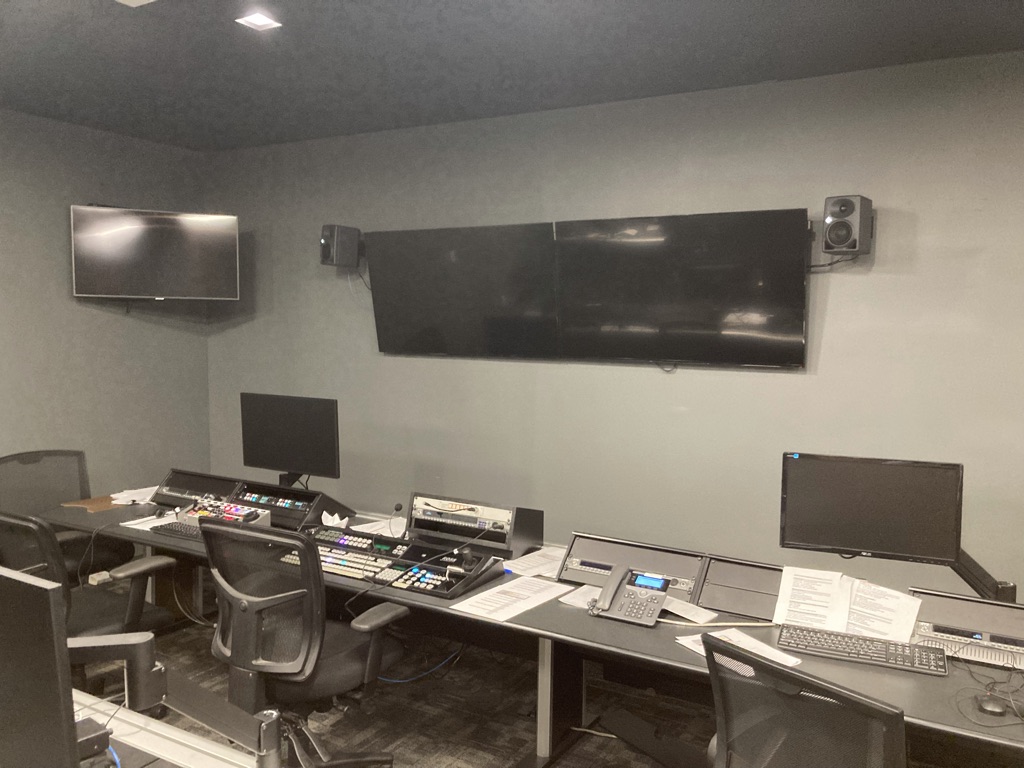 Located in the front of the studio is a switcher board, which is used to switch between different audio and video sources throughout the duration of a broadcast.

Aiding Skidmore in this endeavor is Director of External Affairs Harrison Baker, who helps iron out problems and get new crews of students up to speed on how to carry out each role. His official responsibilities include overseeing Skidmore and his team to ensure that everything is running smoothly, in addition to making sure that they have what they need to succeed.

“There’s always issues that arise because you’re working with equipment that sometimes goes awry,” said Baker, who along with Skidmore wears a headset during each broadcast so he can give assistance when needed. “That’s just the way the business is, and you’re working with new people who may not know exactly what you want or how to do it, so you kind of have to figure out as you go every step with the way.”

On top of being directly responsible for broadcast operations, Baker also oversees marketing, communications, social media, and student engagement for the Athletic Department. He even serves as a liaison between the people running each broadcast and the MAAC conference, as it is his job to convey to everyone what needs to be done based on the information he’s received from the conference.

“Hectic, always hectic,” Baker said when asked to describe his many duties in one word. “Anything live broadcast-wise is always a little bit crazy. You’re always kind of thrown curveballs every step of the way, and then you kind of just have to solve the problem.”

Baker is certainly no stranger to solving problems, as he’s had to get creative time and again in order to bring broadcasts to fruition. Some of the more dire sets of circumstances he’s faced include putting on an entire broadcast (typically a six-person operation) with only one other person during the height of the pandemic, as well as overcoming a malfunctioning replay machine as recently as this past week.

While his skillset offers a great deal of variety, he often leaves the more technical aspects of the job to those who serve in more specific roles. One such person is senior Dan Oakes, who has been in charge of operating video replays as a paid intern since his sophomore year.

Oakes, who initially got involved as a cameraman as a freshman after discovering the position at the campus activity fair, worked his way up to the role of technical director before ultimately sticking in his current role as a paid intern. He is now saddled with the responsibility of creating video replay playlists, which he then queues up for important moments, such as the halftime report.

“It’s kind of like taking a test that you studied really hard for, and you know you killed it,” Oakes said when reflecting on how he usually feels after a successful broadcast. Although he admitted to often feeling overwhelmed when he first started out, he says that he no longer struggles to keep pace with the game being covered, and that he is very comfortable in his role.

Yet another integral figure to the operation is Mike Ferraro, the head of the Sports Information Department, who like Oakes specializes in one particular facet of certain broadcasts. Ferraro, who cut his teeth writing for The Poughkeepsie Journal and serving as an announcer for Marist women’s basketball, is in charge of communicating with the men’s basketball broadcasters during the course of a game in order to inform them about statistical trends.

Oftentimes he finds himself pouring over information on college basketball reference before eventually communicating with the announcers via text to alert them when a record is broken, a statistical outlier has occurred, or a trend has unfolded. Ferraro shares similar information with the person in charge of graphics in order to enhance the in-game presentation.

It’s people like him who help to tie everything together and give Marist broadcasts the professional feel and visibility that they lacked for so long. The importance of producing top-notch broadcasts is not lost on Skidmore, who feels an obligation to deliver quality viewing experiences to the families and fans of Marist athletes.

“I’ve seen parents who live far away from their kids. It’s rewarding to know that they can see their kid play,” said Skidmore. “When we did the men’s soccer championships, our whole run, we added international streams. We had some kids who were Canadian, some kids who were Central and South American, and to know that their parents wanted to watch them win a championship, they could. They had that ability to share that joy with their parents.”

Recently, Marist men’s and women’s basketball gained this exact type of national exposure, as the women’s game was covered by ESPNU last Thursday, followed by the men’s game on Friday. The national coverage, which was organized through the MAAC conference, required collaboration, as key figures such as Ferraro had to attend meetings beforehand and adjust to providing sports information to new and unfamiliar announcers.

The ESPNU broadcasts required the entire operation to shift their focus, as the MAAC conference wheeled in a 53-foot truck containing numerous cameras that were used for the live coverage, effectively displacing the people operating cameras for Marist. This allowed them to instead focus on in-house forms of entertainment, such as scoreboard content and in-game fan contests, further highlighting the versatile skill sets of the many talented people who put together Marist’s ESPN broadcasts.