Chris Riviezzo, the Interim Director of the Center for Sports Communication, is changing that reality with the creation of the Center’s own show, Red Fox Report.

“My background is ESPN,” said Riviezzo.  “I graduated from [Marist], and I’ve been at ESPN for 21 years now and I am trying to bring the practical side of the industry to the students. This is exactly what I do on a daily basis, so it’s sort of a no-brainer for me to help get that launched here.”

“We can utilize the facilities that we have to give [students] the hands-on experience, to make it a real-life experience.”

Beyond Riviezzo, who many students refer to as “Riv,” there is a group of students who help run the operation, with roles being determined by prior experience with TV and broadcast productions, as well as individual strong suits. The operation begins with senior Matt Spirio, who along with Riviezzo came up with the idea to launch the “Red Fox Report.”

“It started at the top with [Riviezzo]. He said ‘let’s do this’, then it goes to me. I’m the general producer of things.” said Spirio. “Our ultimate goal is to showcase all Marist sports in a ‘SportsCenter’ format where nothing’s off the table.”

Spirio is best described as a jack-of-all-trades and is involved in nearly every aspect of the operation. From getting every editor’s highlights in, to helping peers manage shot sheets, to setting up the studio prior to filming each Wednesday, Spirio does his part to keep the entire crew of students on task.

His role in each broadcast’s production is essential due to the frequency in which these broadcasts are produced, with four shows recorded over each two-week period. From there, the “Red Fox Report” airs during halftime of Marist’s ESPN broadcasts, with the broadcasts rotating through the four prerecorded shows over the course of two weeks so that each of them is broadcasted every few days.

Beyond Spirio, there are numerous other key figures who help bring each broadcast to life. The most visible of these figures are the hosts, each of whom auditioned to fulfill the on-air roles. This role requires a great magnitude of preparation before filming each week, as hosts are expected to be ready to go so that the production isn’t undermined by on-air slipups.

“Each week, each one of us [hosts] cuts one of the highlights, and then we’ll get the scripts in the highlights from the other people that create them,” said senior James Haug, one of four on-air hosts. “A day or two before the show, we just kind of go over all of them and rehearse as much as we can so that when we get in there, we can try and do it in one take or two takes.”

The process of putting the show together often requires creativity and resourcefulness. Many of the highlights that are displayed while the anchors moderate are difficult to extract. Some games have highlights that aren’t located on the Marist website or ESPN, requiring the students to pull from them other schools’ websites and streams, which often differ in quality levels. Students often have to make adjustments and get crafty in deciding how to cut the footage. 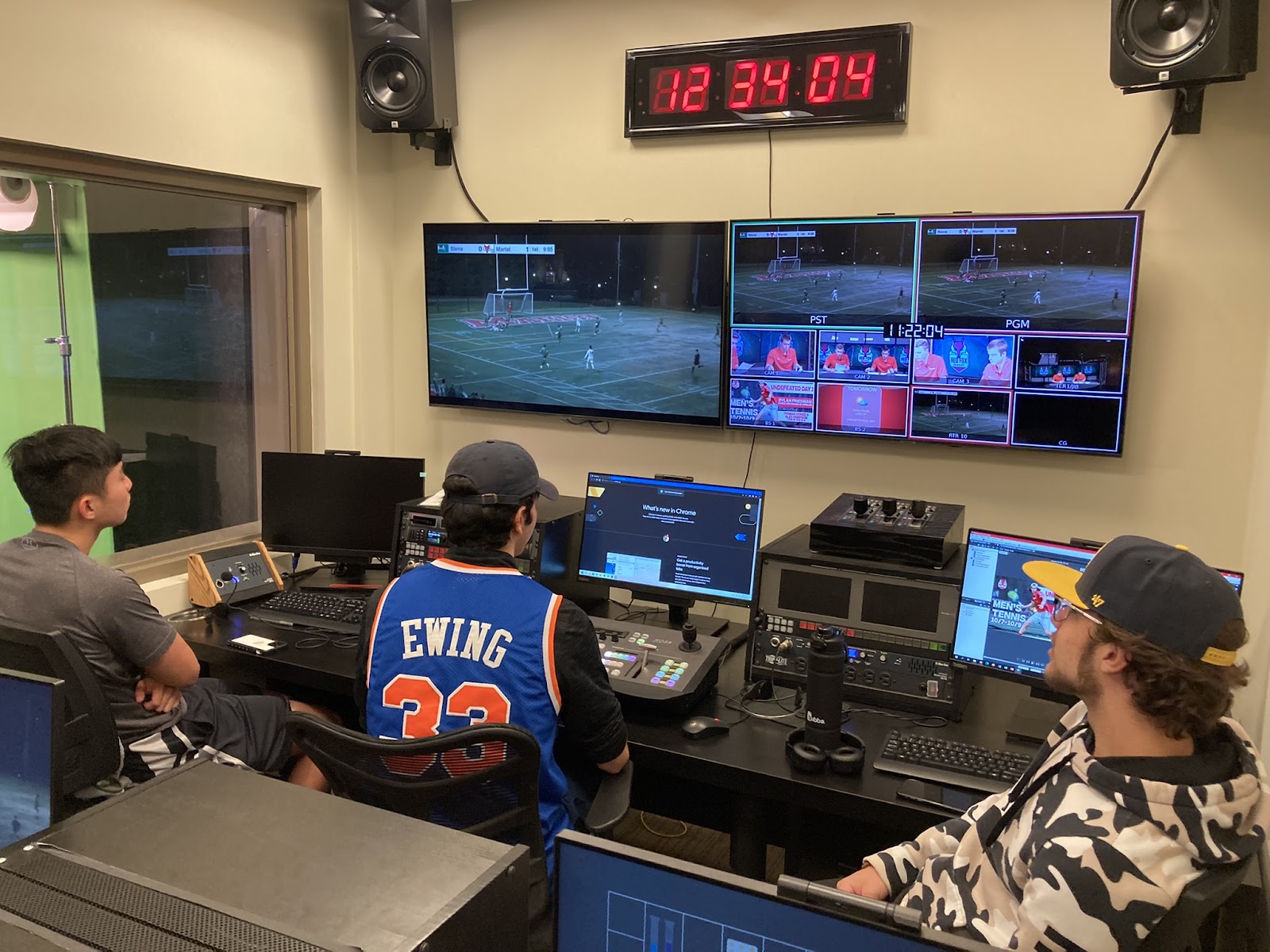 Students operate the controls of the TV studio during the filming of the “Red Fox Report.” (Credit: Luke Sassa)

For sports such as tennis and cross country, both of which have practically no existing footage, the students improvise in finding a way to bridge the visual gap. They’ve done so by creating graphics displayed during the segments for those sports. Senior Jarod Rodriguez, and sophomore Kira Crutcher, both specialize in producing graphics for each broadcast.

“I use Photoshop [to create graphics]. The first time, I used [Adobe] Illustrator just because I didn’t have access to a good Photoshop program. It’s interesting to play around with different text features, manipulating photos, and I really try to include the full picture of the event as if you were covering the game,” said Crutcher.

Crutcher also filled the role of being a switcher, as she was in charge of determining which camera shots would appear on-air along with pulling up graphics for one of the shows. The role required her to work alongside floor directors and managers, ultimately giving her more experience in a different role as she looks to expand on her skillset.

“It was really cool to get that experience and learn how to use all of the different buttons,” said Crutcher. “I’m excited to learn more about how to work different things in the studio such as audio and lighting.”

As the shows have begun to progress, so too has the production value, with smoother transitions and background music among the improvements students have made to the broadcasts. With logistical issues beginning to subside, Spirio is now focused on increasing involvement.

Viewers of Marist athletics on ESPN broadcasts can expect to receive frequent updates on their favorite teams with the “Red Fox Report” set to become a fixture during halftime going forward, with a student-run group leading the way in creating quality broadcasts and gaining quality professional experience.